I've been on a quest the last few years. Less lecture, more student directed learning. It's been difficult. One minute I think it sounds like a great idea, the next I'm doubting whether or not I can really "step back" and allow the learning to take place without being specifically directed (or explained) by me.

It's been an ongoing quest, that I really kinda put into high gear this year with my 8th grade classes. More PBL, more activities, and in November I realized that I only had given two lectures so far the entire semester. This has been a HUGE accomplishment for me, but I wanted to see if I could do more. You see, after Thanksgiving break marked the return to my traditional units. Starting with Washington's presidency and the Hamilton/Jefferson fued.

I set a goal for myself. No more lectures this year.

That meant changing up how I did this unit. Because when I opened my lesson plans, there were three lectures I usually gave. I needed (wanted) to see if these middle school kids could really understand the same concepts without direct instruction from me.

So I dove in. Below you'll find a general outline and explanation of how I approached this unit and the results and reflection that follow. (Note...We are on a block schedule with 75 minutes every-other day.)

Days 1-2: Jefferson/Hamilton Hyperdoc (Not sure what a Hyperdoc is?? Click HERE)
**This alone replaces a guided reading worksheet, sorting worksheet, and a lecture**

I created a Hyperdoc over the information I wanted the students to know about Washington's first presidency and his cabinet members. Below are some pictures of what that looked like. 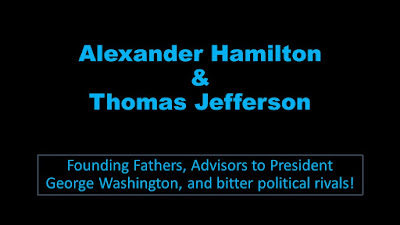 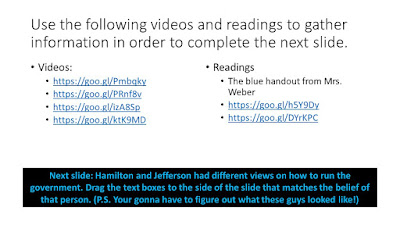 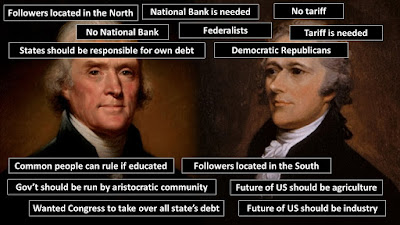 I had a little fun with the kids and technology... After doing a sorting exercise to identify the opinions of Hamilton and Jefferson, students were to use GIFs to answer a series of questions. Talk about a FUN way to incorporate technology into my content. The students LOVED it and were totally focused on finding the perfect GIF to represent George Washington's view on political parties. When everyone was finished I projected a few of the kids' GIF answers for all to see. It made for a great discussion! 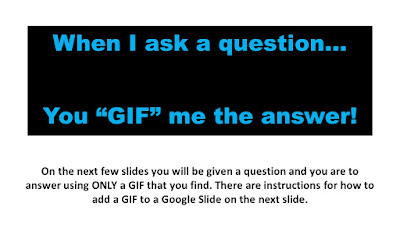 Click HERE to view a completed Hyperdoc from an 8th grade student.

Days 3-4: Prepping for the Hamilton vs. Jefferson Point CounterPoint Debate.

The last few slides of the Hyperdoc provide an explanation (and rubric) into the final activity for this unit.  The inspiration for this activity comes from working with my social studies PLC (Professional Learning Community) group. The basic idea comes from the old debate show Point Counter Point. Saturday Night Live did a memorable skit on this one..."Jane you ignorant..." (Do not show that clip as an example to your students!)

The idea of the activity is that working in groups of three the students write out a script for a debate show. They will be playing the roles of Moderator, Alexander Hamilton, and Thomas Jefferson. They will then spend some time preparing to present their debate "show" to the class. I require specific issues that must be explained by each politician and why he has that opinion. This requires that the students not only know the positions on issues, but also why.

Students are given the creative freedom to produce their debate show in any way including adding in humor. I've had kids jump in a time machine and take their show back in history, summon Hamilton and Jefferson back from the dead. Some groups have done more research and looked at primary sources for quotes that Hamilton and Jefferson had used about each other. But my favorites are when students take something from modern day and incorporate Hamilton and Jefferson debate into it.

The best one this year was a boxing match between Hamilton and Jefferson. They really got creative with their content...and did a little more research. Check out the knuckles of "Jefferson" (the fists of Aaron Burr land the knock-out punch to Hamilton.) SO AWESOME! 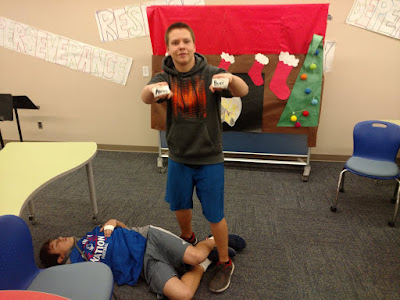 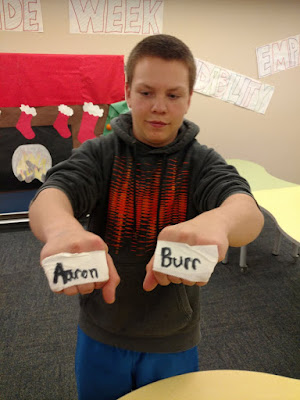 Reflection:
I have done the Point Counter Point activity for the last 6-7 years, but this is the first year that I didn't do the direct instruction on the content prior to the project. The only thing I had to "go over" to make sure they understood was the concept of a tariff. Everything else was completely student directed learning. I provided the resources, added some relevant technology fun, and an activity at the end that required them to collaborate, apply what they learned, add some creativity and practice some speaking skills. I was so very excited to see that these debates were just as good as the years in which direct instruction was the primary method for information.

Feedback from Students:
If you're not asking your students for ideas...start. Seriously. Sometimes I think we, as teachers, assume that students will just want to make things easier, but they have REALLY good ideas. I had one student suggest that instead of a typed out script, that each student had to learn their character's opinions and answer without a script, making it more like a true debate. I LOVE this idea, and frankly thought it would be too challenging for my students. Now, I have confidence to give it a try!

NEVER underestimate what your kids are capable of doing. Challenge them with things that are hard, provide the tools necessary to meet that challenge and watch your students explode with confidence and engagement!
Posted by Jill at 8:42 AM