My 8th graders are learning about the Articles of Confederation.

Confederation.  Yup, that was the first constitution that governed America during and after the Revolution.  Most Americans have forgotten that they ever learned about it.  If they did...

The Articles of Confederation didn't last very long.  It was our first attempt at creating a new country.  There were errors, weaknesses.  It needed to be changed.

I have always seemed to struggle teaching the kids about the Articles of Confederation and it's weaknesses.  I've done it through a mix of lecture and illustration in the past.  They always seem to struggle to understand, and even remember it.

This year I added a new piece.  A simulation.

Especially when the students start off with a cool task, having no idea how it is connected to our current topic, and then see their faces when it all "comes together." 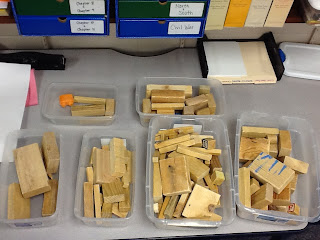 I had the kids sitting in six groups.  Each group received a box with blocks.  The blocks were NOT distributed evenly (on purpose).  I gave them these instructions.

1.  With the materials given to you, create the biggest and strongest castle you can.
2.  This is a COMPETITION.  Winners get prizes.
3.  You may share, trade, or give blocks to/with other groups, but again this is a COMPETITION.
4.  You have 5 minutes.  GO! 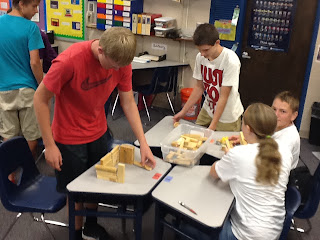 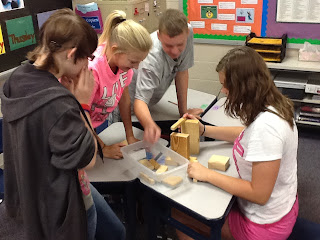 Immediately the group who received the least amount of blocks start going from group to group asking for any blocks they might be willing to spare.  None give any.  The poor group ends up with a very tiny and sad looking castle, which took all but 30 seconds to put together...if they took their time.  While the other groups are working on getting the best they can out of the blocks they were given. 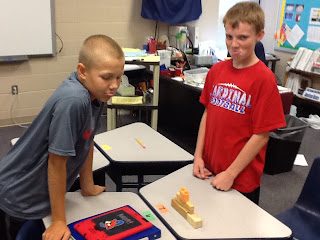 The group with the most blocks wins.  (No real surprise here...)

My point.  I always have a point.

I ask the students "What if I told you that the group given the least amount of blocks was in charge of having a castle strong enough to protect our entire class?"

They all look worried, and someone says "well, we're dead."

If I would have told you that, at the beginning, how might that have changed the look of that group's castle.

"Oh...we would have all pooled our blocks together!"

What they just experienced was one of the major weaknesses of the Articles of Confederation.

The Federal Government had to ask the individual states to provide troops for the nation, but each stated wanted their own troops, for their own military.

We may have been called the "United States of America," but we definitely weren't UNITED.

I think this year's 8th graders will remember and understand the Articles of Confederation and why it failed better than any class I've had in the past.  They had fun, got to build something, and learned!

Once again...this idea was not mine.  Teachers beg, borrow, and steal ideas from each other and then modify to fit their classrooms.  I am no exception.  Thank you Nathan Mc for this activity, you are awesome!
Posted by Jill at 11:33 AM