Short on time? Try a Mini-Breakout

A few posts ago, I wrote about BreakoutEDU and how cool it is for the classroom.  I just LOVE the concept and how it can combine collaboration, problem solving, and critical thinking with content. (Read that post here.)

But I get it.  Sometimes teachers don't have the time to sit down and plan or set up an entire breakout that's going to take a majority of the class period (if not a couple days depending on time and post-breakout discussion.).  And sometimes it's just plain over-whelming.  Too much to think about during the precious few minutes of plan time.

Today I scaled it back.  Instead of creating a game filled with a variety of locks and clues, I used just one.  One lock, one locked box, with one "puzzle" to solve.

I really had no real idea how it would go.  I decided to try it on my HS class of future teachers. (Read about my Teaching as a Career Class here).  I have told them many times this year...since it is the first year for the program...that they are my guinea pigs.  This time, I was testing out how a Mini-Breakout would work to teach new vocabulary terms.

I selected four of the most difficult vocabulary words on our next topic and  used a basic "Frayer Model" type of vocabulary template.  Word. Definition. Example. Image.  I filled in all areas of the chart with correct information. I did this for each word giving me a total of four Frayer model vocabulary cubes.

I then went to work making my QR codes.  Using Google Docs and a free QR code generator I created the link the code would take the students to, looking something like this...

I created a separate one for each word, each with a different number.

I placed the QR Code in the center of the Frayer Model square, printed off the four vocabulary cards and cut them into four separate pieces.


Shuffle the pieces all together.

Now the fun part.  I placed a 4 digit lock on a small lock box (anything that locks would work here...even a zipper pouch with at least two zips in order to lock it.)  Wrote the words "Alphabetical Order" on the board as a clue... some saw that right away, others had to be directed. 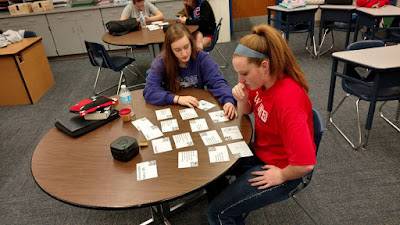 When class started students were randomly placed at a table which had the lock box and set of cards. We briefly reviewed the Frayer Model and reminded them that each block of 4 cards would include a word, definition, example and image.

I smiled, told them that this would be MUCH MORE FUN than copying down definitions on a worksheet, and told them to begin. 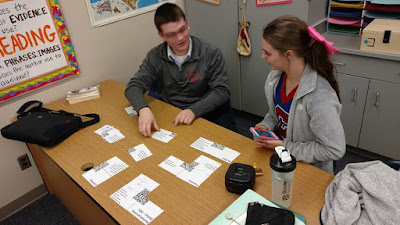 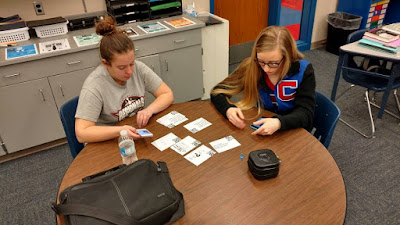 Eventually all groups had it figured out.  If all four squares were correctly put together, the QR code would take them to a number for that word.  If you put all the words (with their numbers) in alphabetical order you would have the correct 4 digit combination to get into the locked box. 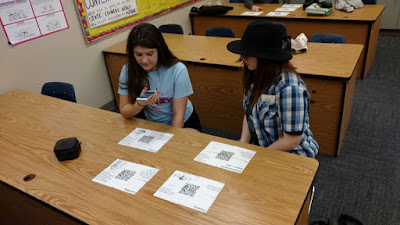 Success!  This "trial run" on my high school class told me that I don't have to spend hours pouring over clues and locks and content to create something fun and engaging in class.  This is definitely something I will do again with my middle school classes.  It took me one day to pull it all together.  Definitely time worth spent!

***My HS students have had experience with Breakout EDU and understand the basic idea behind using QR codes and trying to figure out how to break into a locked box.  If your class hasn't ever done anything like this before, you may need to give more instruction than I did.
Posted by Jill at 6:50 PM