Marbury vs. Madison: A Case for Modification

If you are a social studies teacher in the state of Kansas, and many other states around the U.S. who have adopted a new way of teaching social studies, you should be using primary sources in your classroom on a regular basis.

And if you are using primary sources in your classroom on a regular basis, you have probably run into the heated debate of whether or not to modify those documents.

The debate centers around two basic ideas.  1) that primary documents shouldn't be messed with.  Students should read, analyze, and infer from the original wording.  2) Documents should be modified to make them easier for students to read and understand. Modification of primary source documents can be as simple as copying the text in different font and size to make it easier to see or as detailed as substituting confusing words for a simpler version.

Most teachers have no real problem with changing font or the size of words in order to make it easier to see.  As some elementary schools have cut out cursive writing, reading primary documents written in cursive will become a bigger problem in future years.

The debate tends to get heated with the "substitution of words" portion of modification.

While I do believe that the students should be exposed to written primary sources in their exact form, I believe it VERY important to take into account the ages and types of students in your classroom.

I teach 7th and 8th graders, 12 to 14 years old.  They do great reading and understanding most letters.  They can analyze photos, artifacts, and political cartoons with out too much guidance.  However, when it comes to government documents, that is where I lose them.

And I mean, LOSE them.

This is where modification comes in for me.  Today's example, Marbury vs. Madison.  I have no problem saying that I STRUGGLE to teach using the John Marshall's official written decision of Marbury vs. Madison.  I don't necessarily struggle with the reasons behind the case or the result.  But the document sucks.  It is hard.  When I read it I am looking up over half of the words and I'm an adult!

If I give this document, even excerpted, to the students without ANY modifications to the words they WILL SHUT DOWN.  Again, I can't blame them when I struggle to get through it.

So what do I do?  The state requires that I teach this document to my students.  It could show up on their assessments.   If I don't at least expose them to it, I am doing them a huge disservice.

After much longer than I usually spend planning activities, searching online for idea after idea, and reaching into my differentiated instruction, cooperative learning, and multiple intelligence bag of tricks, I finally came up with a lesson that I can stand behind.

It is still not my favorite lesson, but it was manageable, the students had to use the document (original wording as well as modified), and they walked out of my room with a greater understanding of Marbury vs. Madison than classes in the past when I just skimmed over the details and made them memorize the importance. 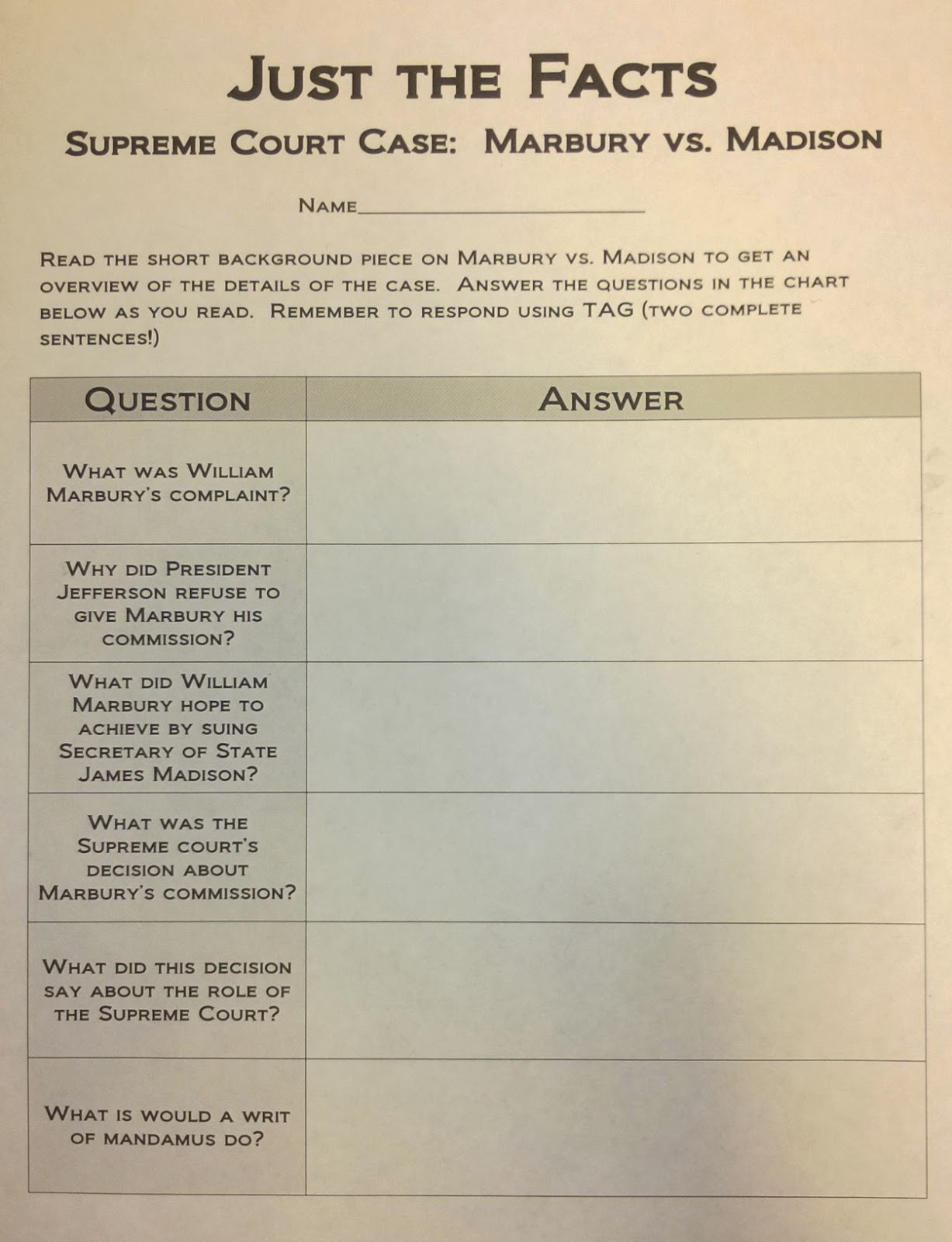 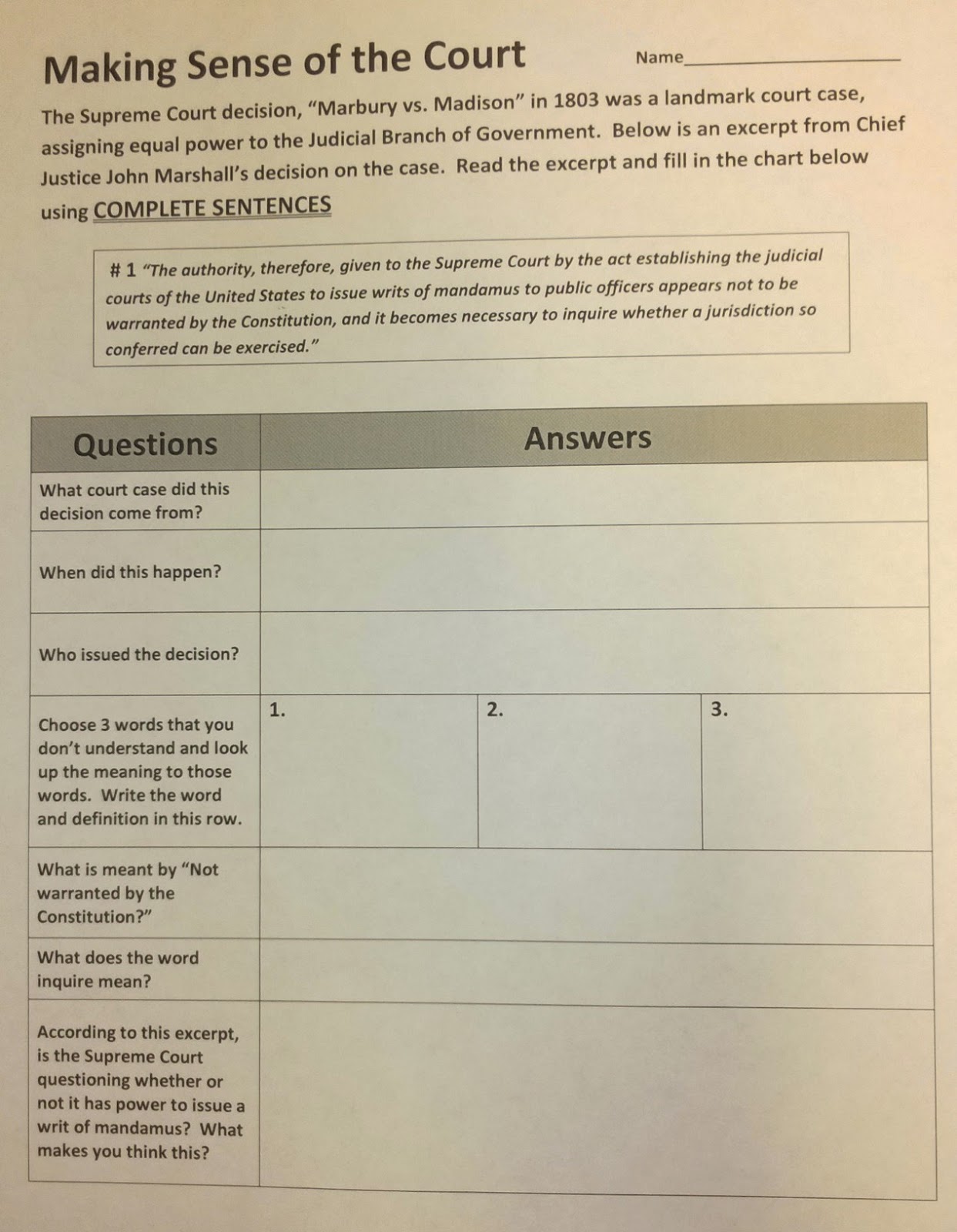 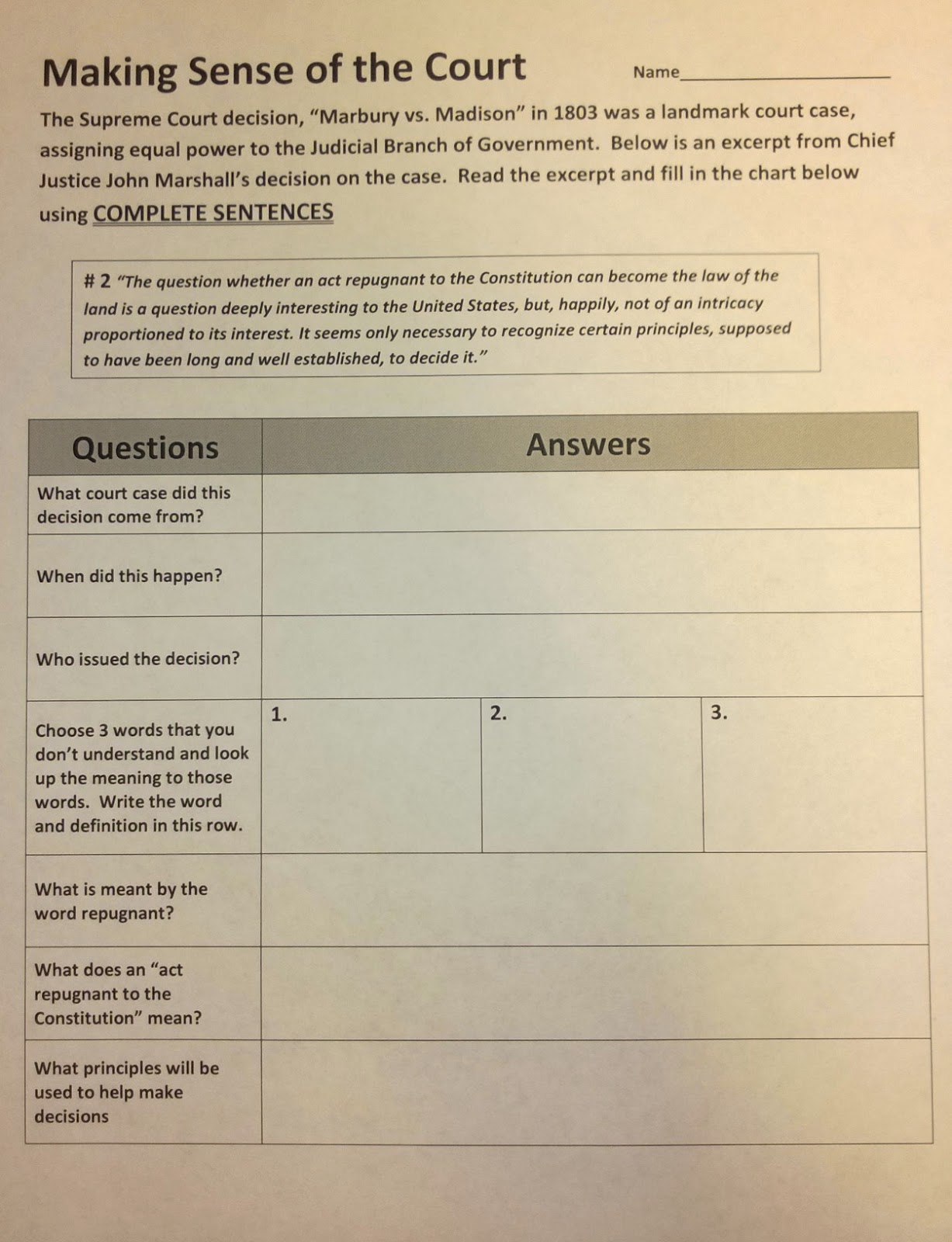 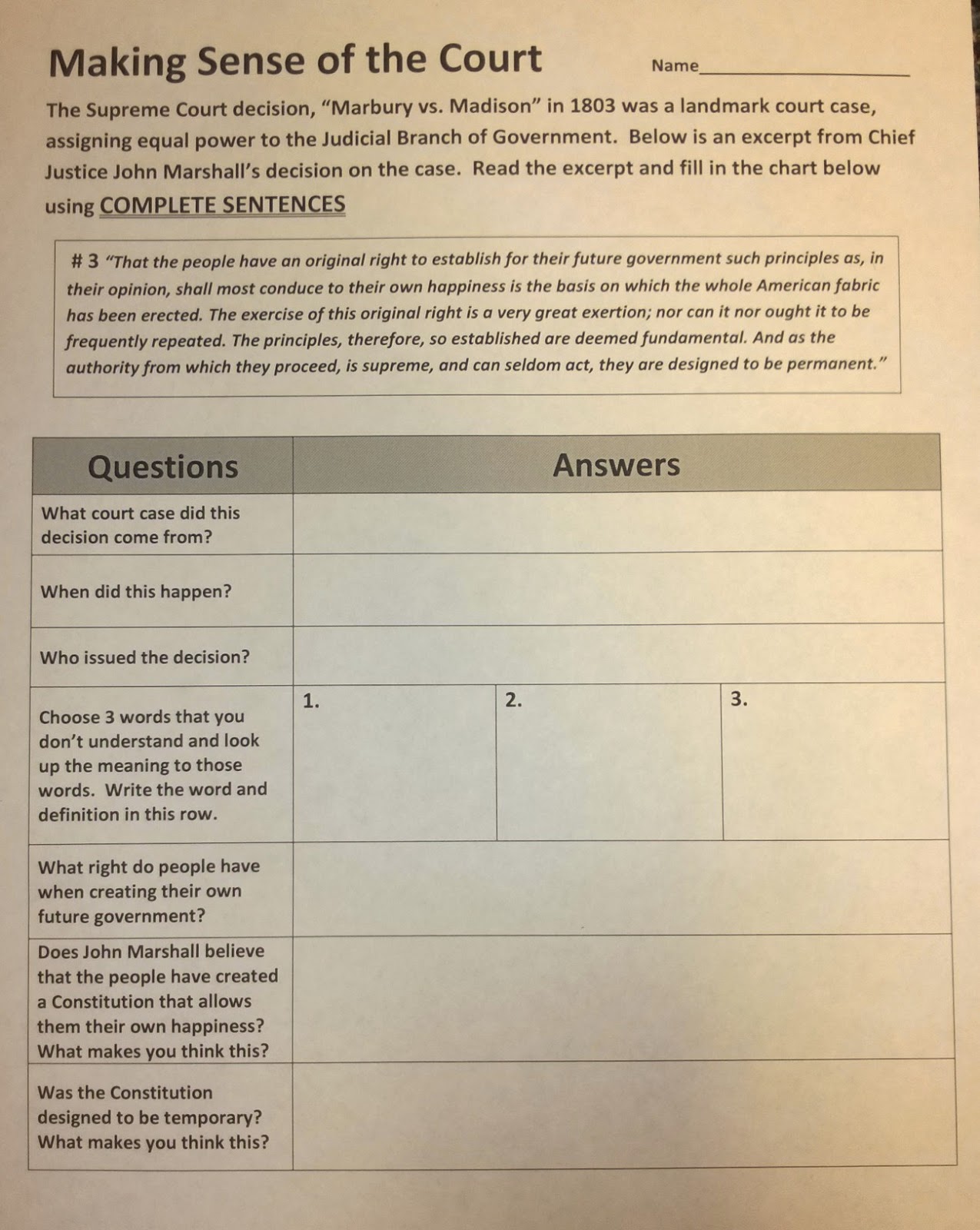 Whew!  That's intense, and it took a long time to put together, but in the end I believe it was worth it.  I was able to expose the students to original wording of the document with very little modification, just typing the words in larger font and excerpting the document.  After they struggled for a while I was able to provide some relief with the more modified version of their expert.

The cool thing?  Most kids were able to get the answers to the questions from the excerpt itself and didn't end up needing the modified version, but there were some who were very relieved to have the modified version given to them.  Allowed them to understand the information and come away feeling accomplished.

I did not write this piece with the purpose to advocate for or against modification on primary source documents, but the highlight a time in my classroom where I thought modification was necessary.  I believe first and foremost that you have to look at the kids in your classroom.  Exposing them to primary sources is importing.  Analysis is important.  But when trying to read documents that are grade levels higher than the average reading level in the room, kids need help or they will shut down.