Today was awesome.  My 8th graders have been studying the Lewis and Clark Expedition of the Louisiana Territory for two weeks now.  They've watched an awesome video from National Geographic, they've wen't "old school" and colored a poster illustrating encounters with Native Americans and today they were able to participate in a debate centering around the question...


"Were Lewis and Clark respectful to the Native Americans they met on their journey?"

The lesson plan over the debate or Structured Academic Controversy (SAC) comes from the Stanford History Education Group or SHEG.  (Click HERE for the lesson plan on Lewis and Clark).  If you haven't checked out SHEG yet...what are you waiting for????  Seriously.  Go now, or at least after reading the rest of this post!  Click here for SHEG

It was super fun.  The students were able to argue in a structured environment and EVERYONE was successful in using evidence from documents to support their view.  It was awesome.

And that's how I planned on ending the discussion of Lewis and Clark.  Turn in your written explanations and we move on to the War of 1812.

And then something happened.

While I was moving from group to group and arguing with them (super fun to argue historically with the students by the way...) An 8th grade boy, Cody, responded to a point made by saying...

I stopped in my tracks and said, screamed "That was awesome!" (I might have scared him a little...)  "Great idea Cody, I am totally going to use that to sum up the end of this topic.  You're awesome!"

And that's what we did.  After students finished with their written conclusion I told them that they were to think about what all we have learned about the Lewis and Clark Expedition and they were to write on the note card a hashtag phrase that would describe it.

What followed was an engaged group of students all excited to share their best ideas for a hashtag.  They were helping each other sum up their ideas, think of words, and even write legibly.

Here are some of my favorites: 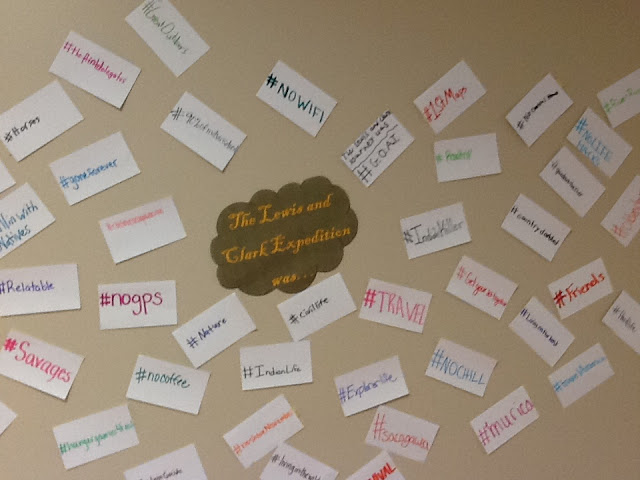 I am definitely going to do this one again! I had students stopping by throughout the day to add more hashtags to the group!  Talk about something that got students' attention and made them think!