I got this idea from the American History Study Group I get to go to four times a year.  This activity was done one of those days a few years ago.  (I am SO THANKFUL and lucky that I am part of a district that allows me to continue to grow and learn through this workshop!  If you're interested in my personal feelings on Professional Development, head over here).

The basic idea for this activity is to divide kids into teams. I did it randomly by having my students think of their favorite holiday food or drink and lining up alphabetical by the first letter of that food.  (Apple Cider, Pumpkin Pie, and Mashed Potatoes were among the most popular favorites!)  I then counted them out by 7's so I would have 2-3 in a group.

PS...I love three students to a group or less.  Makes it harder for someone to just "sit back" and do nothing.  Sometimes I have to go with four based on numbers.

They were then given a paper for record keeping.  It asks three big questions they have to try to infer based on nothing but the photo of the artifact. 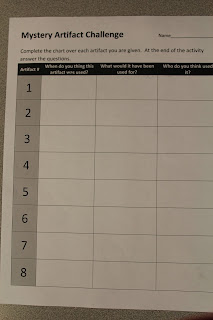 Each group was then to send one person to "pick up" the first artifact.  I give them some time to analyze it, walking around asking them questions such as; "Why do you think that?" when they write certain answers.  Then I repeat this step for each artifact.  The students are to keep all artifacts throughout the activity, because they all have something in common.  They all are a part of the topic we will be studying for the next two weeks. 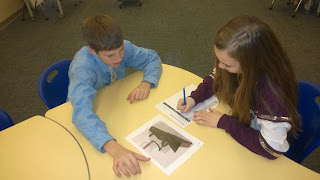 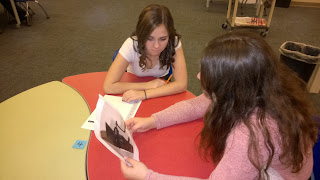 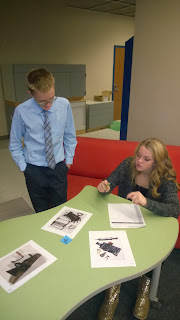 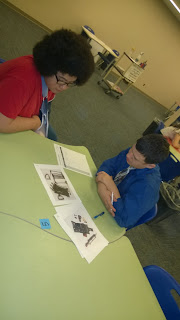 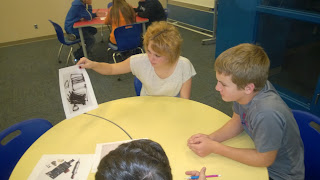 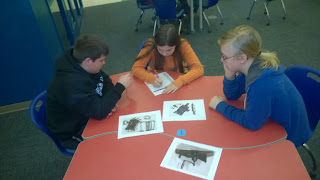 I love how this activity made them think like historians.  They really looked closely at the photos and tried to determine what our topic would be.  Their ideas evolved as they received new pieces of evidence.  Most groups by the end of the day had reached the conclusion that it was Lewis and Clark or at the very least "explorers."

The kids liked it too.  They were involved, engaged, and excited to figure out our next topic.

They did think it would be "WAY COOLER" if I had real artifacts and not just pictures.  I told them if I won the lottery I would put "buying historic artifacts for my classroom" on the list of stuff to buy!  :)
Posted by Jill at 10:48 AM