Debating, Creating, and Having a Say

I have about a million things I should be doing.  My to-do list is getting a little scary.  BUT today was just too great for me to sit down and work on sub plans.  I am so pumped with the way this activity worked out today that I have probably told everyone I've seen.

I have 3 blocks of 8th grade students.  We meet for about 75 minutes every-other-day.  Last class period we reviewed the Legislative branch and the steps it takes for a bill to become law by utilizing some awesome Kagan strategies, sequencing cards, and the classic "I'm just a Bill" video from Schoolhouse Rock.  It was a great day full of movement, teamwork, and songs stuck in everyone's head.  But it was just a warm-up for today.

Today is the real deal.  Today the 8th graders had the opportunity to create my classroom policies for the school year.  Their ideas will become "law" if they are able to complete the steps, complete with the fear of a Presidential Veto (I get to be the President!) and the possibility of overriding that veto.

I divide the class into a small group for the Senate and a larger group for the House of Representatives.  I provide them a proposed bill filled with 10 rules for Mrs. Weber's classroom.  They work in their separate houses to revise and create their own version of the bill.  They do have to stick to the "theme" of each 10 laws that were presented.   I do this mostly based on time.  I need to give them a starting point.  If I just give them a blank piece of paper to start from scratch, they'll never get done (at least not in the one class period time limit that I give them).

Once each group has their rules created, they come together for a joint session of Congress.  Each house presents their version of the bill to the other.

But here's what made today awesome!  One of the three blocks did not pass their laws.  And not because they ran out of time...because the vote count in the Senate was not a majority.  In fact, not one senator voted for the proposed bill.  They were mad because they didn't feel like the "compromised" bill included enough of their ideas.  They refused to vote for a bill that was controlled mostly by the House of Representatives.

Kids walked away from class M-A-D.  From both houses.  The Senators stuck to their guns and their reasons for refusing to pass that bill and the lead vocalists of the House just couldn't understand why the Senate would refuse to pass it.

It doesn't get much more "real-life" than that!

The two previous class periods who were successful in passing the laws added a BONUS law to their list. These kids added a "special interest" rule onto their bill.  They participated in pork-barrel politics without even realizing it!

And last but not least they argued and debated over many of the same topics in education that teachers face today.

I just loved watching these kids in action today.  And yes, I had to calm them down a couple times, I had to encourage some who were sitting back and keeping quiet to speak up, and I had to flat out say "that will NOT happen" once or twice.

In the end they were successful.  I will be presenting a combination of 1st and 2nd block rules to all of my classes next week.

Seriously...kids have good ideas.  Allow them the time to debate, create and have a say...you may just be surprised!  The following laws are a combination of the two classes who successfully passed their laws. 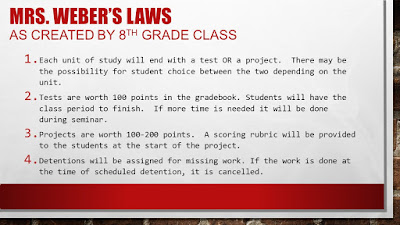 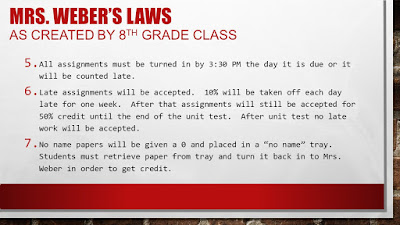 As President, I did sign these into law.  I didn't feel that I needed to veto anything because their ideas were reasonable.  And...we ran out of time. :)
Posted by Jill at 1:36 PM