This is the second post in what will be a series of posts on a project/activity/experience I have been working to create for my 8th grade American History Students.

I have been working on a way to introduce archaeology to my students and give them some hands-on experience digging up artifacts.  I have been working this last year to gain the funds necessary to even attempt the idea I have in my head.  After receiving some grant money through the Kansas Council for Social Studies Mini-Grant and Walmart Community Grant I was able to start doing some serious planning to get this underway.  The project title is Digging Up America and I have decided to break it into three different sections.  Breaking the project into three different parts allowed for short-term goals for a long-term project, and made it simpler for the kids to grasp.

The actual archaeological dig portion of the project is where I spent the vast majority of my time, energy, and grant money.  The idea is a merge between something other awesome teachers have done. My high school American History teacher, Mr. Kulhman, started out our Junior year with a "dig."  It included shoe-boxes filled with sand/dirt and artifacts.  We uncovered them and discovered the first topic our group would be responsible for learning about.

The second amazing teacher is Keil Hileman.  His classroom is a literal museum.  He took a personal interest in collecting historical artifacts and used those to "hook" students into the content.  It literally exploded into a classroom filled with cool stuff.  He has spent years collecting and adding to his stash of artifact goodies.  He even has some elective courses that are specific to archaeology and the study of artifacts.  So cool!

Digging Up America came to me as a way to use artifacts and archaeology to "hook" my students into the events and topics we will study throughout the year.  I have eight large storage tubs that I filled with a mixture of play sand and that "moon sand" stuff.

Each tub has artifacts buried that are related in some way to a major event in early American History. This year I decided on these topics: 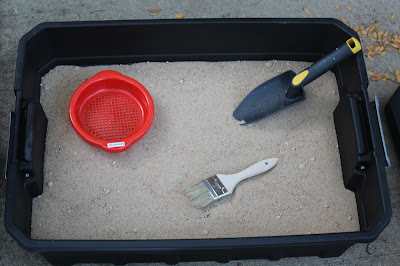 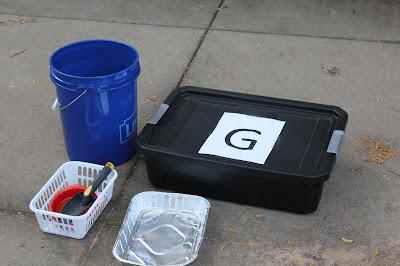 After receiving the Kansas Council for Social Studies Mini-Grant of $500 I went to work searching for artifacts that would fit each category.  I decided to shoot for at least six actual artifacts and one "broken relic."  The broken relic was to sort of represent finding broken pottery that would need to be put back together.  I found a primary source picture or advertisement, had it laminated, and then cut it into many different puzzle pieces. 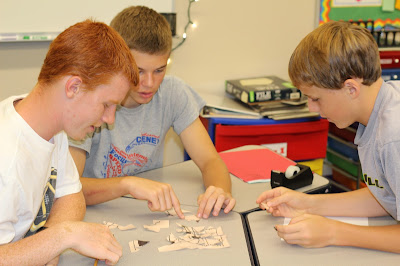 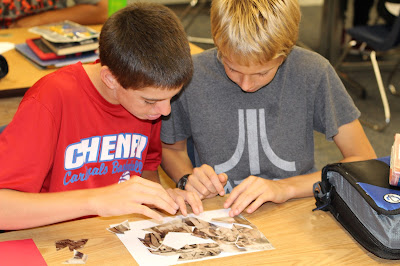 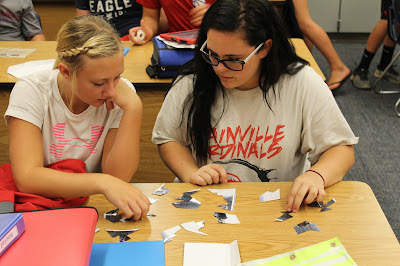 As you will see as you scroll through the pictures, some artifacts are truly realistic, actual primary sources, some are replicas, and some are almost laughable.  With all the supplies I needed to purchase plus artifacts and having the $500, I needed to be somewhat cautious with how much I spent on each item.  However, that changes a little now.  I found out at the end of August that I also received $1,500 from a Walmart Community Grant.  This is huge!  This allows me to spend a little more on some higher-quality tubs that can hold more sand and more artifacts, purchase small digital cameras for students to use to "document" their findings, and have some money to incorporate more realistic and authentic artifacts. 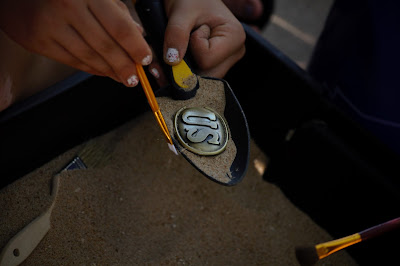 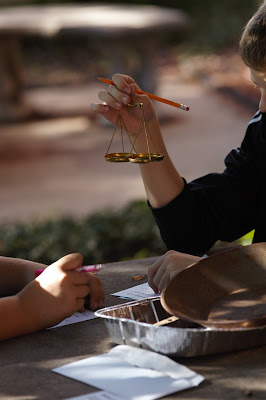 Students were divided into teams of two or three. On the day of the dig, they reported to class to find a folder with their "dig site" information.  Inside, they found instructions, an estimated location and a range of time that it was believed their artifacts have been buried.  These would act as clues to discovering their overall theme later. 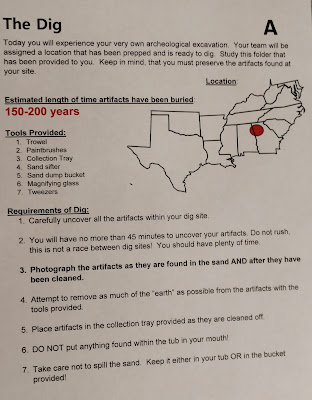 We lucked out with no rain, which was a concern since this has been one of the wettest summers in Kansas.  They headed outside to find their dig site that was labeled to correspond with their information. 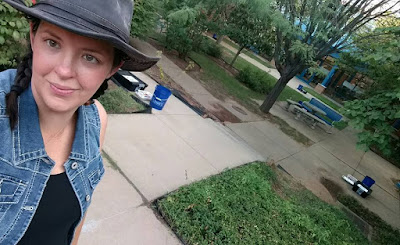 Teams were to uncover all artifacts, attempting to follow the procedure for excavating a dig they learned in the previous introduction to archaeology.  They were also told to document the dig by taking photos of artifacts as they were discovered in the sand.  They were to attempt to remove as much of the sand and dirt with the tools before touching the item with their hands, and provided a sifter to go through and make sure they found everything within their dig site. 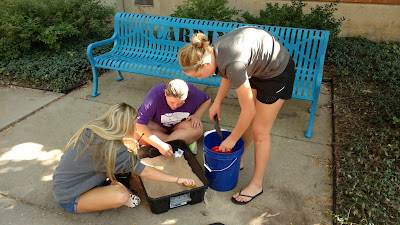 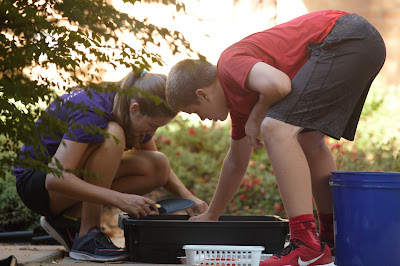 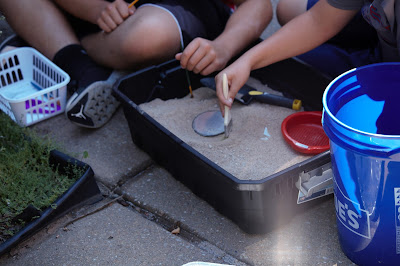 I am lucky enough to have a husband who has a hobby and knack for photography.  He was able to use one of his four volunteer days off from work in order to come and help take pictures while I was busy.  Between him and myself we ended up with many cool photos throughout the day.  All of these pictures were made available to the students through a shared folder.  They can later use these to create their final presentation as well as using the pictures they took with their iPads throughout the dig. 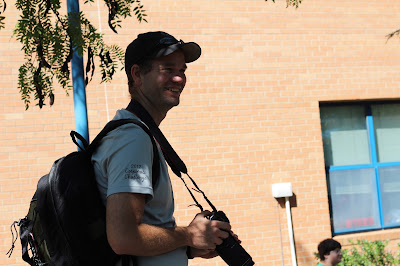 Now the real work begins... figuring out what it all means and what all the artifacts have in common!


Interested in the project documents including rubrics?  Have questions about KCSS or the Walmart Community Grant?  Want to talk about different options to modify this project without funds, let's talk about it! Contact me on Twitter @JillWebs or on Facebook - Jill Weber-cms and we can collaborate!
Posted by Jill at 11:20 AM