My Journey into PBL: The Project

Once I made my mind up and started down the path of PBL, it was done.  I find that once I make a true commitment to doing something, I find myself having to calm down, relax, and focus.  "OK...this is happening, now buckle down and figure it out."

I needed a way to organize my thoughts, figure out exactly how I was going to prepare for my PBL unit.  I had decided on a topic, by taking an old project I had done a few years ago, and using Project Based Learning strategies with it. Ginger was a HUGE force in helping me get all my thoughts organized into something that was workable, answering my questions, and helping me feel like I was on the right track. Eventually I decided on a title for the project.

"Reality TV Goes Back in Time."

The Launch:
I struggled with a way to launch the project.  At first I thought about somehow using BreakoutEDU to merge the idea of reality shows and Kansas History, but after talking with Ginger, she convinced me to do something much more simple.  The key was for me to be PUMPED!  So the students would feed off of my energy.

I used Google Sites to create a page to push to the kids via Google Classroom.  There I included what they were responsible for doing as well as a link to the rubric, which they would help create.  Click HERE to view that site.

I wanted a way for the kids to see different types of reality TV shows. After thinking about it some, I decided that a Kahoot! game would be the just the thing to get my students excited about this project. I create a game using pictures of reality shows, and having students try to guess which show it was. They LOVED it...and of course were wondering WHAT IN THE WORLD DOES REALITY TV HAVE TO DO WITH OUR FINAL PROJECT?

Excitement.  Curiosity.  Engagement.  It was a successful launch.

The site didn't work.  I had tested it out on other people, both inside and outside the district, but for some reason when I pushed it to the students, it was blocked by the filter.  Something our tech guy said shouldn't be happening.  But it did. So we rolled with it.  I projected the site on the board and read it aloud to them.

WE HAVE DONE IT!  Time Travel is now possible, and the state of Kansas wants to take full advantage of this opportunity by increasing tourism to our state.

What better way to do that than creating a new reality TV show that will be filmed "back in time."

Our host, Caroline Sandiego (cousin of the famous geographer Carmen Sandiego) will be sent in the time machine back to a moment in Kansas History and will film the show. This way all can see the awesome past of our state!

Your Task:  What show should she host?  You will pitch an idea for a reality TV show to a panel of judges.  The show will be set sometime throughout the history of Kansas and YOU must persuade the judges that your idea is the best!  The judges will then choose which reality show they will begin working on.


We had 6 work days available for this project.  We are on a block schedule so that's 6, 75 minute class periods.  One of those days would have time for a soft-deadline, which I had arranged to work with the 7th grade communications teacher. When the students were in my classroom, they would take turns with a "practice run" of their pitch presentation. This would happen in front of Mrs. Harris' 7th grade communications class. This would provide the teams with feedback coming from students that weren't in their normal classes, students would have the opportunity to learn how to provide meaningful and helpful feedback without being rude, and Mrs. Harris would get the opportunity to see the presentations. She is awesome at public speaking techniques and would be a valuable resource to these kiddos.

An example that comes directly from this "Soft-Deadline" and student feedback happened, when one of the teams, who's title of their show was "Speakeasies" was looking at their feedback from the communications class. The note said "I wonder why you titled your show 'Speakeasies'?"

The student read that and looked at me and was a little confused about that feedback.

"Well, what does it mean if your audience didn't know why you picked that titled for your show?" I simply asked him.

(Light bulb moment...) "Ohhhh...that we didn't do a good enough job explaining what a speakeasy was."

Because of the feedback from their peers, this group was able to make some adjustments to the amount of information they gave. This was invaluable to the groups progress.

In the end we had many awesome historic reality show ideas and pitch presentations. The top three reality shows chosen by the judges were...


Fashion from the Past:  Created by Korri, Maddie, and Braylin.
This reality show would bring fashion designers from today back to a time period (that would be randomly chosen by large spinning wheel).  The contestants would be required to make clothing using the materials and style of that time.  The clothes would be judged by past and present style icons.

Speakeasies:  Created by Quincy, Harrison, and Trenton
This show would take place during the time of prohibition in the 1920s and 30s.  Famous make-over couples from HGTV (such as Chip and Joanna Gains, and the Scott Brothers) would go back in time with the task of designing the hidden bars called Speakeasies.  The contestants would present their design ideas to a team of 1920s Bar Owners who wished to operate illegal bars under the radar.


This show was unique in that it would require going back into two different time periods.  Two families would either travel back to the time of the Homestead Act, or the underground railroad.  Each family would get a set of supplies and attempt to survive either living on the homestead and maintaining a farm through all the challenges that Kansas environment has to offer.  Or successfully escape along the underground railroad to freedom in the North. The show would document each family's journey.

The overall winner ended up being "Speakeasies"!  The boys dressed the part, presented a quality show, and persuaded the judges that their idea was the best. 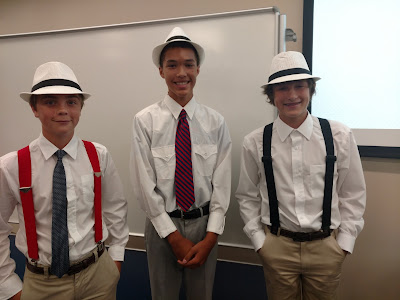 Stay tuned for my post on the reflection including; the struggles, successes, and thoughts from the students themselves!
Posted by Jill at 1:51 PM